Paul Jameson: me, my motor neurone disease and the opera project that got me singing 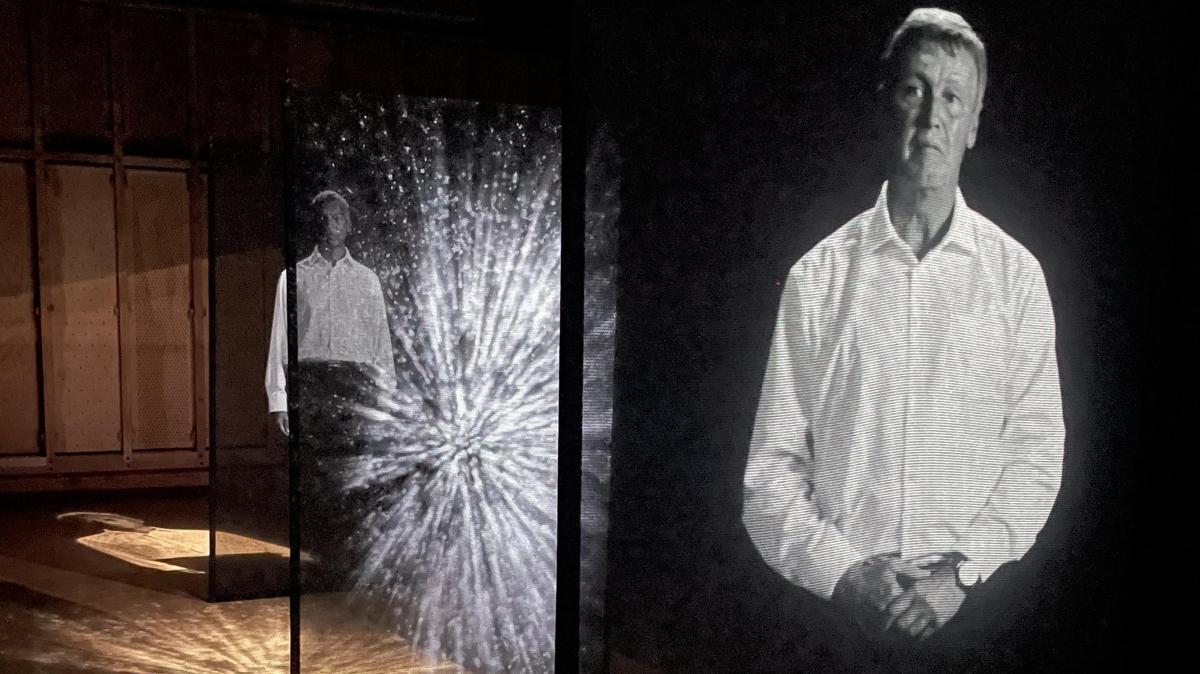 Inspiring: The Sound Voice installation, with Paul Jameson in the foreground and Roderick Williams behind

On the stage of the London Coliseum two men stand side by side, recording a song. One is world-renowned British baritone Roderick Williams. The other is Paul Jameson, a 61-year-old entrepreneur from Surrey. Four years ago Jameson was diagnosed with motor neurone disease, which has rendered him unable to speak more than a few words at a time, let alone sing. Yet here he is, performing an aria.

Jameson’s sounds are inevitably effortful and sporadic; Williams repeats the same words in exchange, but with full operatic articulation, effectively giving his colleague back his voice. “I know this is my voice and it sounds to me like my life and soul,” he sings. This has all been possible because of the composer Hannah Conway and her company Sound Voice. Paul, the aria that Conway and the librettist Hazel Gould have created with Jameson, is one of three pieces in an installation showcasing their work with people who face irreversible voice loss. It launches Kings Place’s 2022 series Voices Unwrapped, which celebrates the power of singing.

“I can just about manage one-syllable words, like yes and no, but certainly can’t string a sentence together,” Jameson says, in writing. “It’s very frustrating. At times I feel like a monk who’s taken a vow of silence.”

The pieces in the installation express how bound up the voice is with our sense of identity. “I know I look and sound a different way, but I am still me . .. ’ begins the song, “I left my voice behind”. It is sung by the Shout at Cancer Choir, in which all the members have undergone laryngectomies. Among them is Pug Halliday, a former builder who describes himself as having been “the annoying bloke singing songs loudly, badly”. Now, he is able to sing easily again, with a “tubeless mobile talkbox” called Electrospit that projects sound through the mouth.

Sound Voice began when a close member of Conway’s family lost his voice because of a terminal illness. “Having worked in music for nearly 24 years, I was struck by how devastating this was,” she says. Conway has written operas in 12 languages, “but I’d never sat down and thought about the intrinsic value of the voice”.

Since the project was founded in 2019, Conway and Gould have spent many hours with participants and their families, exploring what developing a piece of music with them would mean. “Hannah and Hazel asked probing questions such as, ‘If your voice was a thing, what thing would that be?’” Jameson says. “I did express concern about my lack of musical talent. Hannah must also have been a little concerned, as she arranged a singing lesson for me in advance of the aria recording!”

When Jameson walked into the Coliseum on the day of the recording, “I actually cried, then laughed at the absurdity of it all. I was about to sing at the home of English National Opera when I had no voice — and even when I did, I was tone deaf. Talk about out of my comfort zone.”

To Williams, Jameson’s stoicism is astounding. “As a professional singer, how can I even begin to imagine what it’s like to lose your voice?” he says. “I can only marvel at the human capacity to continue positively when something so important has been removed. It’s extraordinary how the human spirit can continue with such gusto and inspire other people.”

Williams has no doubt that music can forge deep connections across seemingly impassable boundaries, reaching parts of the mind that other things cannot. “There is no better medium than the combination of music and poetry to share a profound experience,” he says. “Music can unlock this both for the person who’s lived it and for the person, like me, who hasn’t but is able to gain a small window into what it is like. Someone coping with the loss of their voice would probably be stoical and keep it to themselves — because what other means is there?”

With opening night under a fortnight away, Jameson says he is “excited and a little nervous”. He hopes that 30 friends and family will attend. “Taking part in Sound Voice has been one of the most inspirational, emotional, rewarding and wonderful experiences of my life,” he says. “When I stood beside Roddy for the final recording, I was hypnotised by the whole thing; proud to have done my very best. Roddy, being the professional he is, made the whole performance much easier. We had a real understanding.

“For a while, it genuinely felt as if I had my voice back again. It filled me with emotion, especially watching my wife, Jess, in the auditorium. It was a love song for her.”

Sound Voice is at Kings Place, London N1, Jan 13-15; kingsplace.co.uk. The installation runs seven times on each of the three evenings. Voices Unwrapped continues throughout 2022